When to Use Small Coins
with Coin Snatching and Switching

When is Coin Magic Better with a Small Coin?

In another article, I teach that using bigger coins are more visual, and almost always the better choice for coin magic. So, when is it better to use a very small coin?

The answer is … use a small coin when whatever coin magic you are performing would appear more impressive or difficult by doing so.

You increase the coin size, when you want the magic to be more visual.

You decrease the coin size to add an element of difficulty. 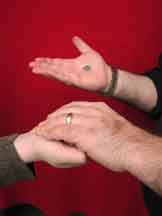 Let’s use different coin-snatching effects as an example:

In the Upside-Down Impossible Coin Snatch, you build on the impossibility of the task of stealing a coin from a volunteer’s hand before the hand can close.

You provide four or five elements of the effect that make the coin grab impossible. Why not have one of the elements be the miniscule size of the coin. You can even point out that the task is possible the way they do it on tv, with a large pebble, that protrudes from the palm.

But with a flat coin, the grab becomes significantly harder.

And with a small coin, the coin fits in the pocket of the palm of the hand, which makes the trick doubly difficult. Impossible.

When Offered a Choice of Coins

If you wanted to present the difficulty of the task being related to the size of the coin in other coin snatches, like The Rochester Switch or Kip’s Take, I suggest that you do it in an offhanded manner.

Wait, until someone offers you a choice of coins for your coin magic. Then make a quick comment about it being easier with bigger coins … so, you’ll do it with a smaller one.

Of course, have a plausible reason why it’s harder with a smaller coin.

You can try the “small-coin-makes-the-trick-harder” explanation with other coin magic as well. Just make sure you give them a reason why.

Some people classify coin snatching as a stunt, rather than magic. So, you might be thinking that this explanation would only work for stunts, where you want it to appear “difficult to accomplish.”

This wouldn’t work for coin magic, because magic is supposed to appear effortless. Right?

This tactic does work for coin magic, too:

The ghost has a harder time locating a smaller coin.

We’ll confuse the genii by using a handful of small coins (Calvert’s Claw), instead of one large one.

So, why would I (or you) want to use this strategy with coin magic?

Easy. When you don’t have a larger, more visual coin.

If you have to use a small coin, why not build it into a benefit? 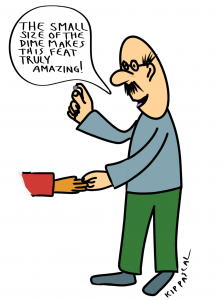 Did you enjoy this article?

Then try this article on how to perform coin magic with cold hands.